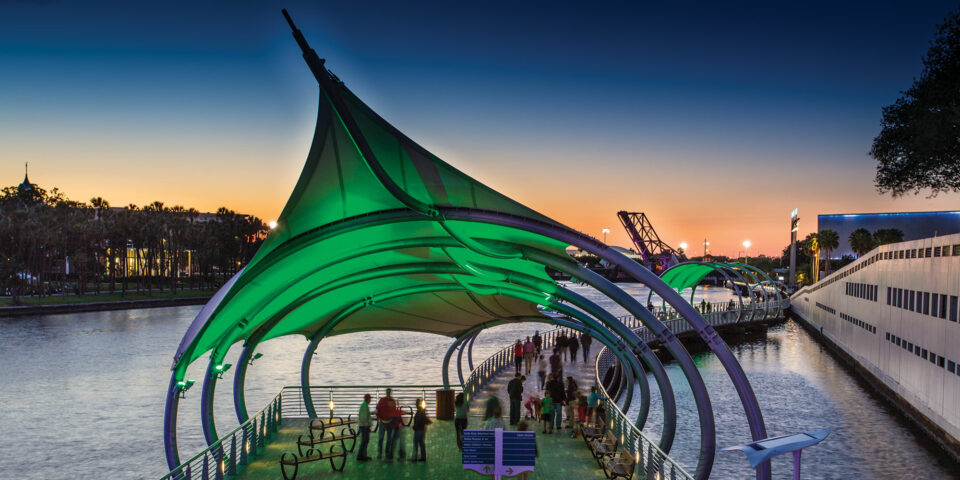 At 2.6 miles long, this waterfront cycling path is one of Tampa’s signature developments, connecting some of downtown’s main attractions while offering stunning views of Tampa. Tour the path by day and hop into museums and galleries. At night, the Tampa Riverwalk transforms into a light spectacle featuring illuminated arches and bridges.

Along the Riverwalk, the historical monument trail represents iconic figures from the city’s history. See statutes of Florida’s indigenous people at Cotanchobee Park, for example, or the Curtis Hixon Park monument to Henry B. Plant, a railroad tycoon who first opened the Tampa Bay Hotel (now the University of Tampa and Henry B. Plant Museum).

At the very north end of the Tampa Riverwalk, cyclists will find Waterworks Park featuring a splash pad, dog park, and stage pavilion. From there, visit the Ulele Restaurant for fine dining and native-inspired food and spirits. A stone’s throw away, explore innovative eateries and retail in the mixed-use community destination that is Armature Works, housed in the historic former streetcar warehouse.

David A. Straz Jr. Center for the Performing Arts

The fourth largest performing arts institution in the country, enjoy a year-round program of live entertainment at the David A. Straz Jr. Center. Make a stop at the outdoor SteamHeat Cafe with an ever-changing menu of light fare such as panini and desserts as well as a full menu of coffee beverages.

From ancient marvels to modern curiosities, the Tampa Museum of Art features a growing collection of visual art and inspiration.

Drink in views of the Hillsborough River from Curtis Hixon Waterfront Park, which attracts over one million people annually to its special events. Relax on the Great Lawn, run through two interactive fountains: the Louver fountain and the Mist fountain, and enjoy a diverse program of entertainment.

Heroes Plaza honors veterans, local police, firefighters, first responders, and all other emergency personnel who have lost their lives in the line of duty.